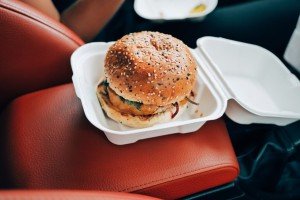 It started with San Diego’s Evolution Fast Food, the first vegan drive-thru in the country. While they consider themselves a “burger and fries” place, all the menu items are made from scratch without the use of any animal byproducts, refined sweeteners, high-fructose corn syrup, hydrogenated oils, or artificial additives.

Owner Mitch Wallace named his restaurant Evolution Fast Food because he believes it’s the direction all fast food is going—and there is a very good chance he’s right. QSR magazine, the leading industry publication for the quick-service restaurant industry, notes “real food” as the top fast-food trend in 2016:

One trend made its way onto more forecasts than any other: clean eating, or food made with ingredients that are free of additives, antibiotics, and other artificial components.

And vegetables aren’t far behind:

Nearly every one of the 2016 forecasts mention vegetables in some form, either as part of a dish or as the logical beneficiary of the evolving move toward healthier eating and cleaner ingredients. Vegetables also help fight off the higher cost of many meats.

This is especially happening at quick-service and fast-casual restaurants across the country, where there are far more vegetable-only options and plant-based meatless proteins—as well as creative uses of potatoes, mushroom, broccoli, cabbage, kale, and other vegetables—than ever before.

Vegetables also dovetail into a wave of other trends, including local sourcing, sustainability, and natural ingredients.

The change is evident across the fast-food market. Amy’s Kitchen, famous for their vegetarian frozen meals and convenience foods, opened its first fast-food restaurant last summer just north of San Francisco. While the vegetarian and vegan option are the big draw, Amy’s takes it one step further by using organic products in 95 percent of the foods, sourcing local ingredients whenever possible.

Evolution and Amy’s also focus on reducing their environmental impact. Both use biodegradable and recyclable materials in containers and silverware, while Amy’s features tables made from upcycled materials, a living-roof drive-thru, and an on-site water tower to collect rainwater for their irrigation and landscaping.

Planet Earth Burger even managed to infiltrate the beef-loving market in San Antonio, Texas, through a Kickstarter campaign in 2014, and Superiority Burger opened its door in the East Village last summer—proving the demand for quick vegetarian food is a cross-country phenomenon. In other words, it’s only a matter of time before Meatless Mondays become a matter of drive-thru convenience for all of us.