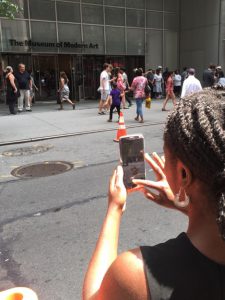 The Pokémon GO game, a mobile location-based augmented reality game that’s centered around the popular 90’s game, has surged in popularity over the past week.  The game challenges users to get outdoors to explore, collect, and train Pokémon while finding items at PokéStops to give them a competitive edge — and explore they have.

PokéStops are located at relevant cultural landmarks such as religious buildings, parks, museums, and even outdoor art sculptures and murals. Reports have continued to stream in on the positive impact that the game is having on visitor rates at museums and landmarks as players young and old let their imagination and enthusiasm take hold. The Crystal Bridges Museum of American Art in Betonville, Arkansas has even gone the distance by “photographing” Pokémon next to works of art to entice nearby Pokémon Go players to visit. The game makers are still grappling with how to handle reports of Pokémon appearing at more sensitive landmarks, such as the Holocaust Museum and 9/11 Memorial.

The game developers are also in talks to engage local museums and businesses more directly by allowing them to sponsor locations in the app. Niantic C.E.O. John Hanke said that, “there is a second component to our business model at Niantic, which is this concept of sponsored locations [where businesses] pay us to be locations within the virtual game board—the premise being that is an inducement that drives foot traffic.”

The game which debuted on July 6th surpassed Twitter for daily active users on Android devices after its fourth day of being released and shows no signs of slowing down. Read more at Vanityfair.com.