Next year, Susan DeCarlo, Vice President – Program Manager, Distinguished, is planning a trip with her 12-year-old daughter to Machu Picchu. The genesis of the idea: Her one-month-long sabbatical this past February which included climbing Mount Kilimanjaro, a safari, and a visit to the small island of Zanzibar off the coast of Tanzania. Susan is one of several of Distinguished’s employees so far who have participated in the company’s Passion Project, which enables employees with at least seven years at the company or at any of the companies Distinguished has acquired to take a 30-day sabbatical. Employees completely unplug from work during their month-long hiatus. That means no access to email (we shut it down), no checking in by phone, text or face time; employees are to completely disconnect. They may choose to go on a major trip, work for a nonprofit, write a screenplay, take a course, or even stay at home with the family. As long as you have all your bases covered at work, you’re good to go – literally. 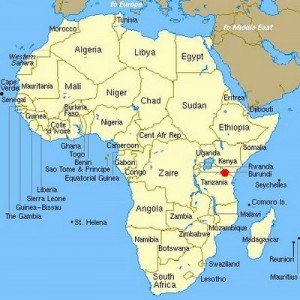 Susan chose to climb Mount Kilimanjaro (Kili) and explore parts of Africa with her running buddy, Suzanne. A Distinguished employee for 16 years, Susan began on the service side and quickly transitioned to sales until four years ago when she joined the Real Estate Umbrella program management team. Susan was the first employee at Distinguished to test the work-at-home environment, where it’s been her base for 13 years.

“The Passion Project began as the idea of our CEO, Andy Potash,” explains Susan. “The project began in 2015, and is a real gift to employees, giving us the ability to take the time to pursue whatever speaks to us. I decided to take my sabbatical in February of this year, as the timing lined up with my family’s needs and work responsibilities.” Married with two children (in addition to her 12-year-old daughter, she has a 15-year-old son), Susan’s family was very supportive in whatever she chose to do.

“I had a lot of ideas on what I wanted to do and began thinking about a proposition made to me 10 years ago by a friend who was looking at the possibility of climbing Mount Kili. At that time, I didn’t think this was something I would ever do. Although I have taken on some challenges over the years, this seemed very big for me, and in the end the trip never happened. But last year I began rethinking the idea. I did a lot of research and soul searching and found a partner in Suzanne who was game to make the trip. We defined our budget and chose the company we were going to use to make the trek.” Individuals who climb Mount Kilimanjaro must go with a tour company that provides guides/porters to accompany them for the seven-day journey up the mountain. 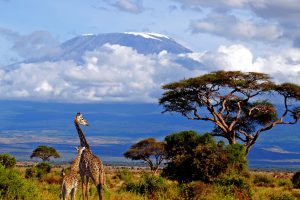 View of “Kili” from the Savannah

“Suzanne and I requested an open group so we could share the hike with others. We ended up with a great group of people from the US and England. They were smart, well traveled and all capable of having a successful summit. The seven of us were on equal footing and were accompanied by 26 guides and porters during our trip.

“The day before we set out for Kilimanjaro, Joseph, our lead guide, debriefed our team on the week ahead. Afterward, Joseph took our team on a tour of the city of Arusha, which was a good opportunity to bond with our new hiking buddies for the week.

“We spent the next seven days climbing and sleeping on the mountain. Most days the average hike time took five to seven hours. It’s not a technical climb but it’s hard and, naturally, it comes with its challenges. The first day we hiked through the rain forest, which was absolutely stunning. The air was dense and the hike was steep. On the second day, we went through the Moorelands, climbing with our ski poles. We were literally climbing rocks!”

Each day after the hike when Susan and her group made it to camp the porters who had set everything up greeted them with a song. “We would retreat to our tents, wash down and then head for dinner in the mess tent, which was served around 6:00-6:30 p.m. After dinner we were debriefed on how we were doing and Joseph would let us know what to expect for the next day, outlining for us the type of terrain we were going to be covering, the weather, what we needed in our backpack and how long they expected the day to be. We had to check our water rations, making sure we drank at least three liters every day. Once the debriefing was over, we took an evening hike of about 30-35 minutes to keep acclimated to the altitude change. Then rest. Breakfast was served at 6:30 a.m. and we were on our way 7:00-7:30 a.m. every morning.” 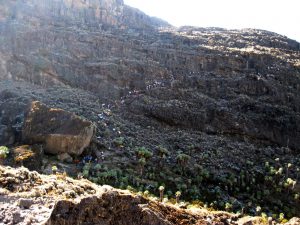 Part of the climb includes the 800+ foot-vertical Barranco Wall, which Susan says was quite challenging. “If we had not been successful that day, we were told later we would not have been able to do the summit.

“The night before the summit, we had an early lunch and were asked to take a nap for two to three hours. We had dinner at around 4:00 p.m., and then Joseph took us out for the first 30 minutes of the hike of the summit. It was quite challenging, a lot of loose rock and it was very steep. You are using your hands and feet at the same time to make the climb. You do this 30-minute exercise to get a sense of what it will be like making the climb as it’s done at night. After our short hike, we returned to base camp to get our gear ready, which consisted of three to four layers of clothing, with lights out at 8:00 p.m. At 11:00 p.m., we were provided water, tea and biscuits and began our journey to the summit at 12:30 a.m.”

The summit hike is done at night so that once you reach the top you can take in the sunrise. “As we made the climb, you felt like you could pluck a star out of the sky.”

During the hike, it’s brutally cold, about minus 4 Fahrenheit. “I had icicles in my hair. We reached the summit in the morning with the sun rising – an amazingly treasured moment. You are above the clouds, surrounded by glaciers and the views are spectacular. We shot individual and group photos, and took in the incredible landscape. We made it to the summit on Valentine’s Day.”

After the climb at Mount Kili, Susan and Suzanne left the next day for safari, taking a small plane into the Serengeti. They also went to Ngorongoro Crater where they saw two black rhinos among the many animals. “That was very special. We got to see the wildebeest migration, which was amazing– just being in a open space watching thousands of animals migrate.” They also spent four days in Zanzibar in the beautiful Indian Ocean. “We were in Africa just under three weeks.”

Susan spent the last week or so of her sabbatical regrouping, spending time with her family. “This was a great experience, the best choice I made for my sabbatical. I learned a lot about myself and what I was capable of. I took on the challenge and was successful. It’s hard to put it all into words, as there is so much emotion attached to this trip.”

Of the many takeaways that Susan got from her trip to Africa was that “no dream is too big.” Since her trip she has taken on some new things…”things I thought I could never do.” She has also taken the phrase “can never do” and really pushed it to challenge herself in more ways. For example, she ran her first half marathon just this month. “It’s something I wanted to do forever and I thought this is the year, I’m going to add it to my list. Also, next June my daughter and I are going to Machu Picchu, a decision that came out of my sabbatical. I met a young woman from Chicago on the Kili trip who told me about her adventures with her mom and how cherished these memories are. I thought, I want that for my daughter, too. Yes, we do stuff together. But I also want to do things that challenge her at a young age so hopefully she has bigger aspirations earlier in life.”

During her time off, Susan was able to disconnect from work, committed to experiencing her sabbatical 100%. On the mountain, she managed to speak to her husband only once but her family gave her something special as she ascended up Mount Kili. “Each of them wrote me a letter for every night that I was on the mountain. It was wonderful, inspirational.”

More About The Passion Project

The Passion Project began in 2015 and provides Distinguished employees who have been with the company at least seven years with the opportunity to take a 30-day sabbatical. Under the program employees have a two-year window to take a sabbatical and can do so every seven years. Employees are fully paid and fully unplugged during this time to pursue their burning passion – whatever it is. They work with their team and manager to figure out when is the best time to take the sabbatical and the support and coverage needed to do so. Individuals taking a sabbatical are assigned a coach – a colleague – to serve as a sounding board, to help keep them on track and ensure enough resources are allocated to cover the workload. Click here to learn more about working at Distinguished.